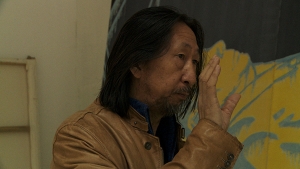 This short film by Andrew Cohen was shot and edited by Julien Roby, and postproduction (colour-grading & sound mixing) was carried by C-Side Productions.

SUMMARY:
Even before his iconic Mao Zedong: AO (1988) shook the Chinese art world, Wang Guangyi, the father of Political Pop, had questioned the inherited canons of western and eastern art history with his avant-garde canvases of the 1980’s, amid relentless social and political campaigns that plaqued the People’s Republic.  As the artist prepares for his largest solo exhibition in China to date, at the Today Art Museum in the fall of 2012, Director Andrew Cohen speaks with Wang in his various Beijing studios about the allure of powerful cultural icons, and the continuing significance of Mao in shaping Wang’s works and world view.

OTHER PORTRAITS OF CHINESE ARTISTS (BY THE SAME DIRECTOR):

A series of short films about contemporary Chinese artists.

An abstract and Geneva-like conversationwith poet and painter Ma Desheng.

Conversation in Milan with Liu Xiadong.

A conversation with painter Yan Pei-Ming, in his sprawling studio in Paris.