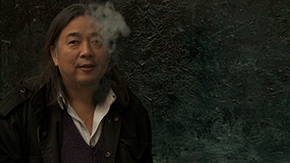 This short film by Andrew Cohen was shot and edited by Julien Roby, and postproduction (colour-grading & sound mixing) was carried by C-Side Productions.

SUMMARY:
During a recent visit to Yan Pei-Ming’s enormous studio outside Paris, the director explores and discusses the prolific painter’s new works.  With a style that blurs the lines between abstract and figurative, Ming examines the existential dichotomies of being and non-being and of hunters and the hunted in today’s society.  Sharing his works that address various social issues such as Rupert Murdoch, women behind veils, starving children, animals or forests soon to disappear, Ming offers the viewer an insight into his creative process.

ABOUT YAN PEI-MING:
«He is best-known for his portraits of well-known political and cultural icons—including Mao Zedong, Bruce Lee, Pope John Paul II, US president Barack Obama, or infamous fraudster Bernard Madoff. In this way his works reference major news events and historical issues, at a point where painting meets the contemporary proliferation of media images. Other works include a series of large canvases on prostitutes, his larger-than-life self-portraits and a ten-meter-long monochrome watercolour of piled skulls, 22 skulls (2006). In 2009 the Louvre Museum exhibited Yan’s Mona Lisa’s Funeral (2001) and other works.» (AAP)

OTHER PORTRAITS OF CHINESE ARTISTS (BY THE SAME DIRECTOR):

A series of short films about contemporary Chinese artists.

An abstract and Geneva-like conversationwith poet and painter Ma Desheng.

Conversation in Milan with Liu Xiadong.

A few cigars in the company of Chinese artist, Wang Guangyi.