Nouvo made a film about “Walking the Edit”

Le video presentation of the project

Walking the Edit (WE) is an original and unique project that takes us the boundaries of filmmaking, new technologies, social media and urban art.
Making a film while walking – the project’s creator, Ulrich Fischer, invites you to enjoy the sensorial experience of an urban stroll, and creates for each viewer a film that is unique and customised.
Using new technologies in a fun and original way (smartphone, web services, etc.), the application is designed to be used by a non-specialised audience.

WHAT HAPPENS DURING THE WALK?
The stroller hears in real time the soundtrack of his film; he/she can imagine the film through sound bites that are chosen according to the urban space he/she is currently visiting – his/her route then starts to follow the script of a film he/she is discovering…
Depending on the route the walker chooses to take, depending on his/her pace and general behaviour, the ambler produces an edited version of his/her stroll, reflecting the chosen route through this shared audiovisual memory that exists virtually everywhere around us.

WHERE DOES THE FOOTAGE COME FROM?
There is no need to capture images or to think about editing: all you need to do is record the route with the WE application for iPhone to awaken the audiovisual fragments that make up the urban space you’re walking through.
Portraits, stories, encounters and observations have been created by a team of directors who’ve studied the territory at length, or are derived from public and private archives.

WHAT THEN?
As the user progresses through the city, he/she can view the film’s editing process using a special graphic display function in the WE application. He/she can also walk around aimlessly and wait for the end of his/her walk to discover the film: once the walk is completed, the stroller can access his/her film from the project’s Internet site; he/she can then decide to share it publicly and view the films of other users.

IN SHORT
Editing is carried out automatically on the basis of audiovisual fragments that have virtually been placed throughout the territory. Each shot (unedited video clip) exists alone on the map, alongside other maps; they all include metadata (data that describe the shot, and include information such as the subject, the shot’s theme, the author, etc.).
The content is therefore completely unscripted and the there is no editing other than the association of two shots. 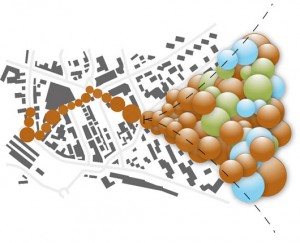 The App WE can be downloaded here.